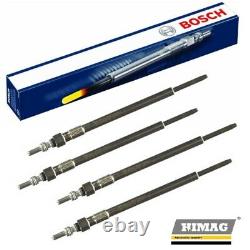 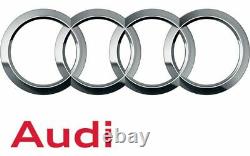 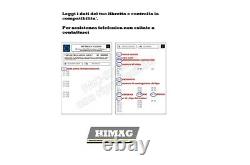 N°4 Plugs BOSCH 0250403009 Audi A3 8P1 8PA Sportback 2.0 Tdi. The description of this item has been automatically translated. Diesel engines produce the point of maximum air pollution in the first 3 minutes after starting. By keeping the diesel glow plugs activated during this period, the temperature inside the Prechamber, or in the case of direct injection engines inside the combustion chamber, will be kept at around 1,000 ° C thus allowing better fuel combustion and reducing 30-40% the emission of polluting gases. The EEC directive n ° 91-542 of 1 October 1991 required all manufacturers to equip new engines intended to circulate in the European Community with control units that guarantee these performances.

We have therefore developed the GENESIS project which has led to the production of a range of products compliant with the requirements of the European directive and with the parameters adopted by the engine manufacturers both in terms of Rapid Pre-Heating from 4 to 7 sec. Prolonged heating up to 180 sec. After starting with an average power supply of 14 volts.

From the application point of view it follows that all the old glow plugs operating with the sole function of the Pre-heating, which we call STANDARD, with the same dimensions as the GENESIS models can be replaced by them. In this catalog the STANDARD glow plugs will show the same Volts of the corresponding original models; The GENESIS glow plugs will show the same Volts as the corresponding original models and, in the models in which they can replace different codes of the same size, they will report the nominal voltage of the supply battery (12v or 24v). In Japanese engines the control units perform a double function: » Free in allowing the Pre-Heating action with the full supply of the battery voltage; » Pilot in the Post-Heating function through the automatic insertion of a resistor which will lower, after starting, the supply voltage to the Volts shown on the glow plug. In these cases, therefore, the wording of the voltage shown on the glow plug does not indicate a characteristic of the glow plug itself, but the voltage that the combined control unit will deliver in the post-heating phase to keep it at a temperature of 900 / 1,000 ° C for a time of about 15 sec. Glow plug, Duraterm High Speed.

If this is not possible, you can request a free of charge deposit and make the withdrawal personally at the nearest branch. Delays due to the courier are not attributable to our company but to the courier. HIMAG - Company Foundation 1993. The item "N°4 Plugs BOSCH 0250403009 Audi A3 8P1 8PA Sportback 2.0 Tdi" is in sale since Friday, May 8, 2020. This item is in the category "Vehicle Parts & Accessories\Car Parts\Ignition\Glow Plugs".

The seller is "himagautomotiveindustry" and is located in CASALNUOVO DI NAPOLI, NA. This item can be shipped worldwide.